Who needs a personal grocery shopper? Everybody does.

Look out for… Instacart, the on-demand grocery delivery company that is now worth a whopping $7.6 billion. The company raised $600 million in its latest round of funding. Instacart launched in 2012 and gives ordinary people their very own grocery shopper.

Here’s how it works… customers get a personal shopper that goes to the grocery store, finds everything on your grocery list, purchases and delivers the items to you. And the continued investment is encouraging news because many thought this company didn’t stand a chance against AmazonFresh which provides a similar service.

Instacart partners with… many grocery stores, including Whole Foods, Kroger, Sam’s Club, Publix, and many others. The company has deals with over 300 grocery stores (national and local). Instacart now has services at 15,000 grocery stores in 4,000 cities with 50,000 customers. Pretty soon we will never need to the leave the house – that’s the ultimate goal in life, right?

Netflix is still the streaming K-I-N-G

The results are in… and they are quite good. Netflix gained close to 7 million new subscribers last quarter which is 2 million more than expected. With the latest results, Netflix now has more than 137 million subscribers worldwide. And with the subscriber growth came a 14% price hike in the company’s stock (hopefully you didn’t sell last week).

Netflix has the last laugh… because the stock plummeted with last quarters subscriber results…and then again, last week, with the rest of the tech stocks. CEO Reed Hastings chalked the second quarter up to “forecasting issues.” Also, in the future, the streaming giant plans to only account for those who pay for their Netflix account – not you ‘free trial’ freeloaders.

Another big plus… is that 6 million of the total new subscribers were from overseas. So what’s next? Well, the company plans to keep investing heavily in original content – somewhere between $8-13 billion in 2018. Netflix is hoping the massive cash investment will pay dividends in the future.

Can Netflix be redeemed!?

Let’s face it… Netflix didn’t produce last quarter – and they got crushed because of it. In case you forgot, Netflix reported 1 million fewer subscribers than expected in the second quarter. However, the company did manage to add 5.2 million subscribers in total. But that wasn’t enough for investors and the stock plummeted.

The stock is still down… 20% compared to before the “bad” subscriber growth results. But now, Netflix can make amends with investors upon third quarter earnings which will be released today. Analysts are expecting just under 5 million new subscribers – but most of those subscribers are expected to come from outside the United States. And for Netflix, having a global audience would be huge.

The results better be good… because streaming media is gaining new competitors by the second! Hulu, Amazon, AT&T, Walmart, and Disney all have streaming services one way or another. This influx of competition means that Netflix better keep coming with original content – and with great original content comes great subscribers…

Sears is bankrupt… and the company’s landlords couldn’t be much happier. Sears plans to close 142 stores before the end of 2018. So it appears it will be out-with-the-old and in-with-the-new come 2019. And property owners agree – they are far better off without Sears and Kmart wasting their space.

According to Kimco… a real estate investment trust that has leases for three Sears locations and eleven Kmarts it has been a long-time coming. In fact, the average rent for the 14 stores is just $5.25 per square foot – compared to the average $15.95 per square foot of other Kimco properties. Sears signed these leases a long time ago, and those lease terms were greatly benefitting the now-bankrupt retailer.

And apart from unfavorable leases… landlords are probably going to be happy to get tenants that can actually pay their rent. Washington Prime Group is another real estate owner that received just 1% of rent from Sears in the third quarter. Really, Sears?  One percent!?

Here’s how a massive PIPE can clean the OCEAN

There is an enormous pipe in the ocean… and it’s not trash – in fact, its duty is to remove debris in the middle of the Pacific Ocean. The Ocean Cleanup foundation just launched the first ocean cleanup system to combat the “Great Pacific Garbage Patch.” The Giant Pacific Garbage Patch is a pile of trash that floats between California and Hawaii and is double the size of Texas.

Here’s how it’s done… the pipe is U-shaped and carries a 3-meter deep net underneath to catch plastic beneath the surface. Every few months, a boat (basically an ocean garbage truck) will come by, collect all of the crap that the net traps, and bring it to shore. Then, we have plastic that can be recycled (like it should have been in the first place!).

But you still need to recycle… because this net isn’t going to catch everything. And actually, some question if the pipe will do much good at all. Apart from the fact it could break down (and add to the “garbage patch”), it may not be enough to make much difference.  But hey, at least someone is trying, right? 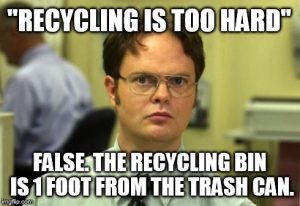 We usually talk business… but today, it’s important we note an incredibly impactful man’s death. Paul Allen, the co-founder of Microsoft, died Monday at the age of 65. Allen founded Microsoft with Bill Gates all the way back in 1975; however, Allen left the company in 1982 after being diagnosed with Hodgkin’s disease.

But he didn’t stop there… because Allen continued on Microsoft’s board of directors and even went on to establish his own philanthropic foundation. From there, he founded the investment firm, Vulcan. Allen also purchased two professional sports teams: the Portland Trail Blazers and the Seattle Seahawks.

Everything around today… probably wouldn’t have been possible without the help of Paul Allen. Allen was a great businessman, influencer, and a role model for many. So today, we honor and thank an impressive man for all of his achievements!

Tech billionaires are arguing about the homeless

And they are… Salesforce CEO Marc Benioff and Twitter and Square CEO Jack Dorsey. The two are in a contentious debate about how to help the homeless in San Francisco – evidenced by one another’s tweets. So, we’ll lay out both POVs and let you decide who is right…

Benioff wants to see companies… raise money to help the homeless. The Salesforce CEO is even spending money to promote ballot Proposition C, a tax of around 0.5% on businesses gross receipts above $50 million per year. The proposed tax would raise up to $300 million annually which would contribute to housing, mental health treatment, and shelter beds. And to put that figure in perspective, $300 million is double what the city currently spends on homelessness.

Jack Dorsey wants to see the mayor… figure out how to deal with homeless people. The mayor is also against the proposition – basically saying that throwing money at the problem won’t help. Thus, Dorsey is not a heartless sociopath; he thinks there are better ways to solve the problem. What do you think about homelessness in San Francisco?

A BIG opportunity for retailers…

There is a $21 billion industry… that has mostly been ignored in years past. That industry is plus-sized women’s clothing, and it is here to stay! In fact, over half of the women in the United States between the ages of 18 and 65 wear a size 14 or higher.

Interestingly enough… “plus size” clothing makes up just one-fifth of women’s overall clothing sales. Retailers have realized this opportunity and are racing to capture these customers and meet the demand. For years, various brands, fashion designers, and retailers have all neglected the market – not just plus-size in general, but trendy plus-size clothing.

Walmart has already… purchased a plus-size clothing brand called Eloquii last week. The company has also launched Terra & Sky, its private label plus size brand and bought Modcloth who also sells extended sizes. Yes – what was once a niche is becoming the norm – and retailers are taking notice.

Who even watches the NFL anymore?

NFL ratings have been down… and the issue is more than the mere money lost by the league and the networks that broadcast the league. The NFL has also become a political issue for Donald Trump and his supporters who argue that the NFL is doomed if players don’t begin standing for the anthem.

But now ratings are up… one month into the 2018 season. That’s right – ratings are up 2% compared to last year. In fact, there has been an average of 15.6 million viewers each week across network partners. And while 2% sounds like nothing, it is actually a big deal for network TV as more and more viewers are switching to streaming services (those damn cord cutters).

How it happened… well, that we can only speculate (and of course, speculate we will). The games have been high scoring with the most points scored through week five in league history. The games have also been close – with 45 games being decided by one score. And lastly, the NFL has, for the most part, stayed out of any controversy this season. Does it get any better?

Broke with bad credit? There is hope for you yet!

So you want to buy a home… but you have a terrible credit score? No problem – because the Boston-based brokerage Neighborhood Assistance Corporation of America is holding events for people in your exact shoes.

Here are the details… borrowers with low credit scores can go through an education session about the program and submit all necessary documents, including income statements and phone bills. After that, they go through counseling to better understand their finances and how to afford a home.

And there you go… you have yourself a house (and a mortgage payment – don’t forget that). The loans are 15- and 30-year fixed with interest rates of around 4.5% and require no down payment. This program is a great opportunity for anyone with credit-mistakes and without $30,000 kicking around for a down payment… 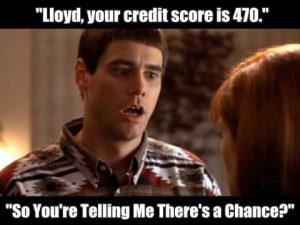