Pandora is getting ‘Sirius’ help with this deal

We have another major deal… with SiriusXM buying Pandora for $3.5 billion! The combination of SiriusXM and Pandora will create the largest audio entertainment company in the industry. And Spotify, Apple, and Amazon streaming services should be worried about what’s to come…

They were already huge… because SiriusXM has 36 million subscribers in North America. However, the company was formed by combining Sirius and XM Satellite radio services back in 2008, so they are no stranger to transactions like this. To add to the fun, Pandora, the streaming music service, has over 70 million active users.

It’s already working for Pandora… and SiriusXM put $480 million to purchase 19% of Pandora’s shares in 2017. The Pandora’s stock was down 35% before the investment; but now, the company is doing better than ever with a share price that has nearly doubled since. Shares of Pandora were up 9% in premarket trading.

Michael Kors is buying Versace… not the other way around in another deal with two HUGE names in play. Michael Kors is getting close to purchasing Versace for $2 billion. The two sides are so close that the deal could be announced this week (but you heard it here first!).

The famous ‘MK’… already owns 20% of Versace and the Versace family owners the other 80%. This move is right in line with Michael Kors strategy of improving its luxury brand offerings. The company bought Jimmy Choo last year for $1.2 billion. However, investors are less impressed by these deals and shares of MK dropped by 7% on Monday.

Ordinary people don’t buy Versace… because most people aren’t famous, rich, or cool enough to pull it off. For that reason, some even think that the MK should give the Versace brand a more modern appeal. And while the new brand won’t add much to the Michael Kors brand, it could give the company a boost in parts of the market it doesn’t already reach. We wonder what the Migos think about all of this? Versace, Versace, Versace…

It’s not about watching weight… it is about watching [your] health and wellbeing! The company still aspires to be the “vest weight management program on the planet” but also wants you to focus on eating healthier, exercising, and being more positive. Now, instead of Weight Watchers, the company will be known as ‘WW.’

Well, it is a start… to making programs more exciting and also more appealing to men (but they will still probably get made fun of for joining). The company now aspires to get you eating well, connecting with others, and enjoying life. So it’s more of a lifestyle than a diet program now.

Some of the new programs… include the Freestyle program which gives you more food options. WW has also teamed up with meditation company Headspace for some added wellbeing built into the company’s app. Shares of the company were up over 4% on Monday. Here is to hoping WW members remain small, but its profits grow large.

Tiger Woods first victory… in five years came on Sunday, but he was not the only winner. That’s right, NBC did pretty well itself by seeing a rating boost of 206% compared to last year. The final round of the tournament was the highest-rated telecast in the history of the FedEx Cup playoffs.

It was also… the highest-rated PGA Tour telecast so far in 2018. Oh, well, excluding the four major championships, which include The Masters, the US Open, the British Open, and PGA Championship. To quantify the ratings, NBC’s coverage earned a 5.2 overnight rating. According to Nielson, this means 5.2% of households in the US were watching Tiger Woods’ win.

Despite his lack of recent success… Tiger Woods remains one of the most popular and most watched golfers in the world. Woods’ received 580 minutes of exposure during tournaments by mid-March which is more than double the average of the next ten golfers. So don’t worry – we haven’t forgotten about you, Tiger. 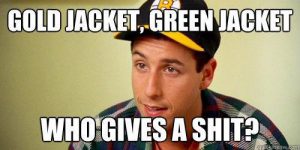 The bids are in… and Comcast is FINALLY the winner. The cable giant put up a winning bid of $40 billion for Sky in an uncommon, three round action held by the UK’s Takeover Panel. Both companies were bidding for 61% control of Sky. 21st Century Fox already owns 39% of the company. But it’s not over yet, because Sky shareholders have until October 1st to accept the offer.

Here is the rationale… for Comcast paying so much frickin’ money for 61% of another company. Sky has 23 million subscribers, primarily in Europe. Sky sells broadband and mobile services and owns top original shows and premium sports content. To sum it up, Comcast wants more European customers and better offerings to compete with Amazon and Netflix.

It’s finally over… assuming the deal is accepted. Comcast CEO Brian Roberts has defeated bitter rival Bob Iger, the CEO of Disney. And the two CEOs have been feuding for over ten years, dating back to when Comcast attempted a hostile takeover of Disney. Disney and Iger may accept total defeat and sell their 39% to Comcast, but we’ll have to wait and see if that happens.

Amazon doesn’t care if they make money… off Alexa, at least. In fact, the $60 the company gets from you for your “Alexa microwave” is entirely beside the point. Sounds weird, right? But it’s Amazon – what do you expect? There is a much bigger purpose for the Alexa voice assistant.

Amazon will cash in… when Alexa users buy things off their website, use Amazon Prime content, and use Amazon Web Services. The data that Amazon gets from Alexa is also invaluable to the company. For Alexa to do her job correctly, she needs to know the dirty details about your life. For example, the Alexa microwave can report back to its boss (Amazon) what you eat and when you eat.

And lastly… Amazon wants Alexa to take over your LIFE. Soon Alexa will be used in home and out-of-home. On Thursday, the company announced Echo Auto, which allows Alexa to come along on your daily commute. It is 2018 after all and about time we have robots that can answer all of our questions and keep us company, right? 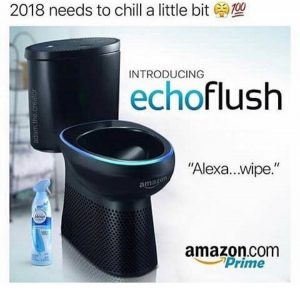 Here’s the latest… Papa John’s is looking to change their logo. In August, the company filed a trademark with the US Patent and Trademark Office for the updated look. The new look comes on the heels of two ad campaigns centered around winning back customers that are currently leaving in droves.

The new logo is said to be… “more streamlined, more contemporary” according to a professor of marketing at NYU. And we agree – the old logo looks boring and outdated. The new logo reads “Papa” and “Johns” in two rectangular boxes and is notably missing the company’s “Better ingredients. Better pizza” slogan. Oh, and they dropped the apostrophe…so you know it’s not John Schnatter’s pizza anymore (is that petty?).

So, why don’t they change the name… well, although it is tainted, the Papa John’s name still resonates with pizza lovers everywhere. John Schnatter would probably have to do something truly vulgar to make the company drop the name entirely. Until then, it looks like dropping the apostrophe will do the trick?

Marijuana CEO: The US needs to relax, man

This guy isn’t just some pothead… he’s the head of a publicly traded cannabis company, as well as a pothead. The CEO of Canopy Growth, Bruce Linton, thinks laws prohibiting marijuana could loosen up soon (for the record, we don’t know if he smokes weed, but hopefully he does). Linton cited the fact that Republicans have had a history of supporting state rights. And what do ya know? Several states have legalized marijuana.

California and Massachusetts… could be given the “green” light by federal regulators to sell and possess marijuana in small amounts. However, pot being illegal hasn’t stopped American companies from joining the fun. Constellation Brands, the owner of Corona, recently spent $4 billion to own part of Canopy Growth.

Canopy has been killing it… but they aren’t the only ones. Cannabis companies Tilray and Cronos are both up this year as investors anticipate significant sales as the marijuana legalization in Canada comes closer. And it’s not just cannabis companies – beverage makers and pharmaceutical companies are looking to get in, too. But for now, the United States largely remains grounded from what otherwise could be spectacular highs.

Brace yourself India – Walmart and Amazon are coming!

Everyone wants to get into India… Walmart spent billions to do it, and now Amazon is following suit. Amazon is going to buy a 49% stake in More, a booming Indian supermarket. The other 51% of More will stay with the Indian private equity firm Samara Capital. The supermarket has over 540 stores across India.

Customers will get more… because Amazon is getting More. The tech giant will address customer needs by providing the groceries they want. Amazon also bought a small stake in Shoppers Stop, an Indian fashion retailer. However, Amazon’s investment in More marks the company’s most significant brick-and-mortar move in the country to date.

Gee, thanks Google… for allowing and defending third-party apps scanning our Gmail accounts. Gmail has over 1.4 billion users, and the platform enables third-party users, such as trip planners and “customer relationship management systems” to integrate themselves right in. These third-parties can use your data as long as they are transparent about how they are using it.

Just last year… Google stopped scanning accounts for advertising purposes. If it makes you feel any better, Google has made its privacy policy “easily accessible” to users deciding whether or not to grant access. And if third parties aren’t transparent, Google supposedly removes them before they do any harm.

Google says… that third party users must undergo a review process before accessing your account. This process includes an automated and manual review of the developer, app testing, and an assessment of the company’s privacy policy.